Coming together as a group, we are inspired to help you create beautiful quilts. From wonderful show quilts made with perfection to the first quilt your granddaughters ever made, we'll do our best to finish what you've started. 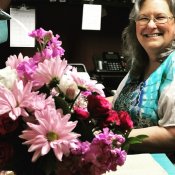 Marcy Marcy
Quilter, Machine Operator, Sales, Owner
Marcy began her long-arm quilting career on a manually-operated machine in a local quilt shop. Shortly thereafter she purchased her own long-arm and worked out of her garage. It was pretty lonely however, and she soon found herself – and her long-arm – working out of a local quilt shop. When that shop closed, Marcy opened her own Local Quilt Shop in 2005. And here she is now with two long-arm quilting machines (and dreams of a third), fabric, classes, and a great staff to back her up! Marcy is a past president of Clark County Quilt Guild and backs up her charity mission by quilting for Linus, Children’s Justice Center, Quilts of Valor, and Cancer Care. She often walks through the shop talking to herself – oh, wait – she’s doing business on her blue-tooth ear phone! 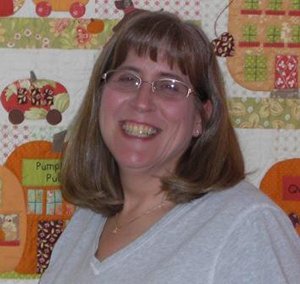 Michele
Quilter, Machine Operator, Sales, Personal Assistant
Michele met Marcy in her garage while walking through their shared neighborhood. In 2005 Michele decided Marcy needed an assistant and she has maintained that job since – with princess benefits! Michele has a BA from Washington State University in Clothing & Textile Design. She started quilting in 2002, often making shop samples for Center Diamond in Cannon Beach. 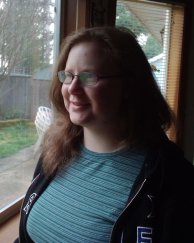 Jamie
Jamie learned to run the long-arm machines at her mother’s (Marcy) elbow in 2005. She recently finished piecing her first quilt and enjoys snuggling under it. Jamie also makes jewelry and writes science fantasy. 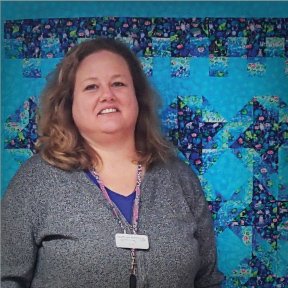 Mitch
Mitch began working for the shop in 2010, cutting kits for a Marti Michel block-of-the-month program. And she never left! Mitch is a former banker and moved to Vancouver from California. She has been quilting since 2004 or so and only recently completed a quilt just for herself. Mitch is very accomplished on the long-arms and does a lovely loopy hand-meander.